The location of the existing building at 30 Cannon Street has a long and interesting history. Formerly home to a medieval church that was destroyed in the Great Fire of London, it was succeeded by St Mildred’s Church, designed by Sir Christopher Wren. The new church stood for over 250 years before it itself was destroyed by bombing during the Second World War.

The existing building was completed in 1977, being one of the last bomb sites in London to be redeveloped. Designed by Whinney, Son & Austin as an office building for Crédit Lyonnais, it was the first building in the World to be entirely clad with Glass-fibre Reinforced Cement (GRC) panels. The facade is formed by tiers of repeating arched white frames around recessed windows, with each tier separated by a black granite string course.

The shape of the building was constrained by the triangular island site formed by Cannon Street, Queen Victoria Street and Bread Street. To combat this limitation, the building was designed so that it leans out at an angle of five degrees, with each floor slightly larger than the one below. In 2015, 30 Cannon Street became a Grade II listed building as part of a group of 14 post-war office buildings.

Comprehensive refurbishment works began in 2015, conducted by Delvendahl Martin Architects to reconstruct the 5th floor to provide additional floor space, whilst developing a new roof terrace that grants breathtaking views of St Paul’s Cathedral and the City. Shadbolt were asked to assist with the refurbishment and supplied Fruitiere Cendre Polyrey laminated toilet cubicle doors and pilasters to the project. 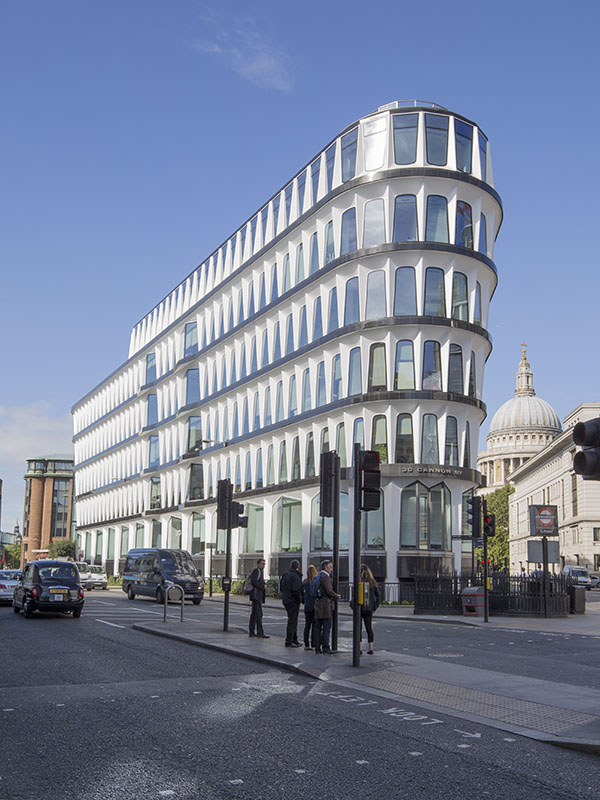